So, we are now going to deal with a couple of verses that deal with the clear distinction between that which is material and that which is spiritual. The Vedic approach to understanding the material energy is quite unique and had a vast influence on the much of the rest of the world.

Before speaking of the highest spiritual energy, Krishna describes and categorises the nature of the five gross and three subtle material energies. Srila Baktivedanta Swami Prabhupada, in commenting on this verse, has stated:

“In the material energy the principal manifestations are eight, as above mentioned. Out of these, the first five manifestations, namely earth, water, fire, air and sky, are called the five gigantic creations or the gross creations, within which the five sense objects are included. They are the manifestations of physical sound, touch, form, taste and smell. material science comprises these ten items and nothing more. But the other three items, namely the mind, intelligence and false ego are neglected by the materialists.”

So, I’ll just speak to a couple of points before we dive into this one a little bit. The term sky, or sometimes the use of the word ether, should be understood here. I think everybody can sort of relate to the grosser elements. The ether, or sky, in Sanskrit, the akasha, speaks about a subtle material energy that actually transports or allows the transportation of sound. Anywhere where sound can be heard, it is due to the presence of this very subtle energy. But it speaks about, also as mentioned here, sense objects, and I’ll try to explain what is meant by that.

We’ll begin with a comment, or part of the commentary of Srila Visvanatha Cakravati Thakura who states;

“The Lord speaks of his two energies (prakrti), superior and inferior, in two verses.”

So I’ll just make the point that this first verse, 7.4, and the next verse which we will get to in the next reading, 7.5, cover these two energies, which Lord Krishna describes as—one as being inferior and one as being superior.

“By the listing of the five gross elements beginning with earth, the subtle elements, known as the sense objects such as smell, taste, form, touch and sound, are understood as well. By the word false ego, the ten senses, which arise from it, and the mahat tattva, its cause, are also understood. Mind and intellect are listed separately to show their greater importance amongst all the elements.”

So probably for the majority of people that have never been exposed to this idea, this is already terribly confusing, and so I’ll go through things, hoping to simplify, or at least clarify, what has been spoken of here.

There was a yoga system that deals with trying to understand the clear distinction between matter and spirit, and this yoga system was known as sankhya, sankhya yoga, and it was started by Kapila deva. Now there are two Kapila devas, and there are two sankhya yoga systems. The oldest and original one was introduced by an avatar, an incarnation of the Lord, Lord Kapila deva. Later there was an atheistic philosopher, also, who had adopted the name, or had the name Kapila. And he also presented a much more limited, and in places, incorrect understanding of the original sankhya yoga; and he referenced his system as being sankhya yoga also.

There were also five elements that were connected to these, and they are described as five sense objects, or the panca-tanmatra. And what has been spoken of here are aroma, taste, form, touch and sound, and I’ll show you how these are all connected in a minute or two.

In addition to these items that have been mentioned here, these ten, there were also ten sense organs. They were divided into two categories of five: the organs which are used for acquiring knowledge, the knowledge acquiring, and they were called the panca-jnanendriya, jnana meaning knowledge and indriya is the senses, panca, meaning five. So the five knowledge acquiring senses were the nose for smelling, the tongue for tasting, the eye for seeing, the skin for feeling sensation, and the ears for hearing.

And there was a correlation between these five knowledge acquiring senses; the panca-mahabhutas, the five gross elements; and also the panca-tanmatras, the five sense objects.

So we see that earth—from earth arises aroma. And the sense organ for perceiving aroma was the nose. And when they present an understanding of the nature of how the material world becomes manifest, it is highly complex, and speaks about beginning with a very subtle form of material energy, in its potential, or pradhana. And to that is added the element of time, kala. And also the three modes of nature, triguna. and this mixture becomes known as prakriti.

And there is a process of gradual, I’m going to use the term condensation, where things move from a more subtle to a grosser nature, and as that process occurs, the gross material elements, the sense objects, and then finally the senses, begin to manifest.

So, in the next line we have water as the gross element, which manifests taste, and with that the organ, tongue.

If we go to the bottom of this list, and we move that way, it may be easier for people to understand:

When the ether, this gross element, becomes manifest, the most subtle of the gross elements, it transports sound which causes the creation of the sense organ, the ears.

The next grossest element is the air. The air gives rise to touch. It’s like you cannot see, taste, smell, feel sound, but you can hear it. But in air you can now feel sensation upon the skin. And so you can see there is a correlation between this gross element, air, and the tanmatra, or the sense object of touch, and the organ that experiences sensation, the skin.

Then the next gross element is considered to be fire, and from fire, the form becomes manifest, rupa, and with that comes the manifestation of the eye.

Then with water comes taste, and the organ for tasting is the tongue.

And then from the grosser element earth comes aroma, and the organ of perceiving smell, which is the nose.

And so in this way they are there is this correlation, or interconnectedness, of these things.

The second category of sense organs, the ten sense organs called the karmendriya, the panca-karmendriya, which are the five working senses, which they categorized as the voice, legs, hands, the anus and the genitals.

And then to these twenty items which we have mentioned, they added, now, three extremely subtle material objects:

The first is mana or the mind. So mind was not seen as simply the functioning of the brain. It is a separate material energy, a subtle material energy that covers the soul.

Then there is the intelligence, or buddhi. This is not your ability to study in school or do exams or to learn something. It is a higher principle than that, although it plays a role in those things. The buddhi is considered higher than the mind, and it makes it so that even in moments, for instance, when a person is overwhelmed with emotions, for instance, anger or sadness, and they can hear a voice, “Don’t do that. Don’t go there. Walk away, rather than becoming further implicated and making your life complicated and unfortunate and sad,” and that’s due to this faculty known as the intelligence, or the buddhi.

So together you have now twenty-four items that are all material in nature, the different ways the material energy manifests, of which sixteen are considered gross elements, and eight are understood as being subtle elements. Then to this is added the twenty-fifth principle which is the jiva atma. the soul; and then the Paramatma or the Supreme Soul which is the twenty-sixth element.

So when Krishna speaks this verse, and I’ll just read the verse again:

So, as was pointed out by the previous acharyas that I quoted earlier, that while only eight energies are spoken of here, we understand that they contain other subtle subdivisions of energy, such as the panca-tanmatras, for instance, and the ten working senses as well, that these are all included and manifesting ultimately from what is called the ahankara.

In the next verse, when we study it, I will speak a little bit more about the nature of the mind, as it was spoken of here, and at least it will be in the context of the next verse, but it will add to the understanding that you will have of this verse. Thank you very much. 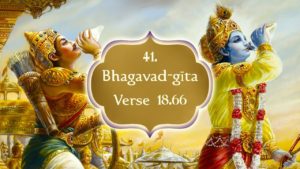 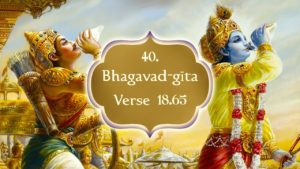 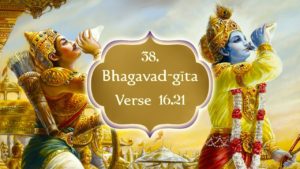