In the world today, many people have rejected religious dogma and organized belief systems. Yet we find ourselves with a God-shaped hole in our hearts and a longing for connection with something or someone greater than ourselves. In the Bhagavad Gita, Krishna speaks to this modern dilemma. Unlike religion, which involves belief in a particular faith, the process of yoga as taught in the Bhagavad Gita, requires a person to embark on a personal spiritual voyage of discovery and experience direct perception of the truth. 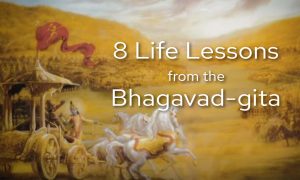