sūkṣma-viṣayatvaṁ – of having subtle sense objects; ca – and; aliṅga – not manifest, unmanifest Prakṛti; paryavasānam – ending at:

This subtleness (pertaining to material objects) extends all the way to material nature in its unmanifest state (prakriti).

This subtleness (pertaining to material objects) extends all the way to material nature in its unmanifest state (prakṛiti).

So following on from the previous verse, here Patañjali begins to define the actual scope of subtle objects and he uses the word ‘āliṅga’. Now I have used the translation…I’ve translated that as prakṛiti, but I just wanted to clarify something.

Vyāsa, in his commentary, does not make any real distinction between prakṛiti and prādhana which are both very subtle forms of the material energy. The difference between them is that prādhana is actually considered the sum total of all the material energy in its most subtle, and in its potential form. It actually has not manifest anything concrete, as it were. When this prādhana becomes influenced by the principle of Time and the three gunas (the three modes of nature), then it is manifest as the prakṛiti, and also now referred to as the mahat-tattva. So both of these states…and there is no need to separate them in relation to this verse…but both of these states are considered the most subtle manifestation of the material energy.

Prakṛiti, as we’ve referred to (or the subtle material nature), contains the principle or the material energy, if I can put it that way so people can appreciate or understand, what’s called ahaṅkāra. So we’ve previously referenced the tanmātras; the tanmātras are responsible…they evolved to manifest the central perception and the fundamental material elements that go on to…the building blocks of the material manifestation.

So this ahaṅkāra is one of the subtle states also that has been referenced here in this particular sūtra. On a personal level, the ahaṅkāra is the most subtle manifestation of this material energy. It is understood by the yogīs principally in relation to our own personal experience as the false conception of the self–the idea of being anything other than the eternal spiritual being; the idea that this body is me when I say things: I am hungry, I am tired, I am tall, I’m short, I am fat, I’m thin. And anything where I’m using this pronoun ‘I’ that is not directly referencing my eternal spiritual being, is understood to be a statement that has been created and influenced by this ahaṅkāra.

So the ahaṅkāra on a personal level is the initial covering of the ātma, and it is the ahaṅkāra that pollutes the pure spiritual consciousness of the ātma and makes material entanglement possible. But when we look at an even bigger picture, and we think of the ahaṅkāra as being an energy and consider the role that it plays in the manifestation of prakṛiti, then we have a much deeper understanding.

In the Bhāgavata Purāṇa it explains that: “The material ego (that is the ahaṅkāra) springs from the mahat-tattva, which evolves from the Lord’s own energy. The material ego is endowed predominantly with active power of three kinds–good, passionate and ignorant. It is from these three types of material .ego that the mind, the senses of perception, the organs of action, and the gross elements evolve. The threefold ahaṅkāra, the source of the gross elements, the senses and the mind, is identical with them because it is their cause. It is known by the name of Saṅkarṣaṇa, who is directly Lord Ananta with a thousand hands. This false ego is characterized as the doer, as an instrument and as an effect. It is further characterized as serene, active or dull according to how it is influenced by the modes of goodness, passion and ignorance. From the false ego of goodness, another transformation takes place. From this evolves the mind, whose thoughts and reflections give rise to desire. The mind of the living entity is known by the name of Lord Aniruddha, the supreme ruler of the senses. He possesses a bluish-black form resembling a lotus flower growing in the autumn. He has found slowly by the yogīs. By transformation of the false ego in passion, intelligence (or buddhi) takes birth, O virtuous lady. The functions of the intelligence are to help in ascertaining the nature of objects when they come into view, and to help the senses. Doubt, misapprehension, correct apprehension, memory and sleep, as determined by their different functions, are said to be the distinct characters of intelligence.”

So in this particular verse we see the items mentioned in the Yoga-sūtra—the first pāda, sixth sūtra, where it mentions these same states of consciousness, or the ways in which consciousness can exist. And it is explained here to be the function of the buddhi: “Egoism in the mode of passion produces two kinds of senses – the senses for acquiring knowledge and the senses of action. The senses of action depend on the vital energy, and the senses for acquiring knowledge depend on intelligence (or buddhi).”

So here in these verses, we’ll have an explanation that the ahaṅkāra is a manifestation of material energy that not only affects and influences the living beings when they are covered by the material energy, but the same ahaṅkāra understood in a broader way, becomes responsible for the evolutes that form and manifest from the most subtle form of the material energy; that the mind, the senses, and the world, in general, becomes manifest because of the influence of this very subtle energy known as the ahaṅkāra.

So if we of course cannot fully comprehend and appreciate this at first hearing, this is something that one needs to go back over. And over time, and as a result of one’s spiritual practice, as one has a gradual awakening of a deeper spiritual understanding, the actual meaning of what has been stated here becomes more readily apparent.

So in this reference to things that are most subtle, in his commentary Vyāsa states the following: “There is nothing subtler than the unmanifest (here meaning prakṛti or prādhana). It is said that puruṣa is subtler than that. The reply is ‘That is true, but the subtlety of puruṣa is not of the same kind as that of the unmanifested prakṛti. Puruṣa is not the material cause of the first manifest object, that is the Mahat, but its efficient cause. That is why it has been said that subtlety has reached its limit in prādhana or prakṛti (which is the state of equilibrium of the three gunas or constituent principles).”

So what Vyāsa is stating here, is that the question may arise in someone’s mind that if prakṛti or prādhana as being stated here, is the most subtle manifestation, then what about puruṣa? Is the puruṣa— the living being, not more subtle than this?

And of course his answer is yes, it is more subtle, but we cannot make a comparison between the material energy and that which is spiritual—they’re of two distinctly different natures. And so that we cannot, on the same scale, say that the puruṣa is more subtle; while it is true, it is a different type of subtleness. That the extent of subtlety of the material energy is in the form of prakṛti or prādhana, more appropriately.

Vācaspati Miśra explains that by saying what it means, is that the material creation or existence exists for fulfilling the objectives of the puruṣa itself. And this is a rather deep idea that is often misunderstood and mischaracterized. In the Yoga-sūtra there’s a verse in the second pāda, the eighteenth sūtra, which I will just read here…but we will deal with that when we get to that part of the commentary.

But it states: “That which is perceived consists of the gross and subtle material elements and the sense organs  (including the mind), all which have the characteristics of the three modes of material nature (gunas), being: illumination (from the sāttva guna), activity (which is a product of raja guna),  and inertia (which is a product of tama guna). Its purpose (the material manifestation) is to provide both worldly experiences and ultimately liberation for the puruṣa (ātma).”

So just in raising that here, the point that I just wanted to make… when the living being, overwhelmed by this ahaṅkāra (the false concept of the self), seeks to become the central enjoying agent; where everything I see is in relation to me, and I perceive this world and its energies, and other living beings, as objects for my personal enjoyment or exploitation—whether that’s done in a caring way or a grossly…as a user, this state of consciousness…when the living being is in the grips of this state of consciousness, the material manifestation is the playground— the ‘kṣetra’, the field of activities for the living being.

But as one progresses spiritually, and comes to learn of the nature of this material entanglement and the nature of the material energy, and the living being sees that I have an eternal spiritual nature which I am not experiencing currently, and then motivated by that one seeks their spiritual enlightenment, then it is said that the material energy has served a purpose; a purpose of education for the living beings. Thank you very much. 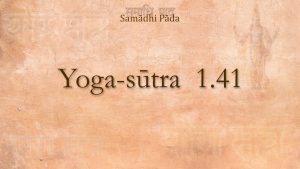