I am back in New Zealand and at Mantra Night. I was asked to narrate some ancient Vedic stories of great saintly personalities over the next couple of weeks. So tonight I spoke about Bhismadeva, a famous personality in the Mahabharata. He is listed as one of the 12 Mahajanas, or people whose exemplary life can be emulated by all people.

Bhismadeva was the grandsire of the Kuru and Pandava dynasties. He was a heroic warrior prince, a great general, a genuine mystic, yogi and saint. The end of his life was truly amazing as he was mortally wounded in a great battle, his body shot so full of arrows that when he fell no part of his body touched the ground. Because of his elevated position, he chose not to die but remained in that state for 56 days instructing his grandson who was to ascend to the throne. Then when an auspicious time arrived he voluntarily gave up his body and returned to the spiritual world.

As part of the instructions he gave, he reminded everyone that the sole purpose of human life is spiritual liberation and therefore all other duties must support that goal otherwise one is simply living like the animals. Bhīṣmadeva advised for all human beings nine qualifications:

He said one cannot be called a civilized person without acquiring the above-mentioned preliminary qualities. 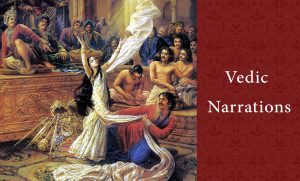