Attachment and renunciation are subjects interwoven with most spiritual paths. However, they can also be used as and excuse for bad (non-spiritual) behavior. I was asked to address the following question:

“Oftentimes I see the “spiritual” idea of detachment used as an excuse to run away from responsibilities, abandon relationships ( all types), or to emotionally disengage in negative and often disastrous ways. I’ve seen a lot of harm done in the name of “detachment”. What is real detachment as spoken of in the Bhagavad Gita and Vedic scriptures? And how is it correctly utilized in a healthy spiritual life?”

In answering the question I have made a few quotations from the Bhagavad-gita which were:

The yogis, abandoning attachment, act with body, mind, intelligence and even with the senses, only for the purpose of purification. Bhagavad-gita 5.11 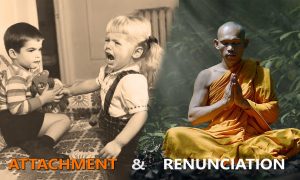